Our approach to control and optimize the fifteen-minute interval peak  power is inspired by the nature. The SEMS intelligence get inspired from social insects such as ants, bees or termites. It reacts like  animals moving in formation (migratory birds, schools of fish…). This inter-agents interaction creates a “collective intelligence”, in order to solve the most complex challenges without the help of any supervisor.

The key element of our solution is a powerful communication technology, which allows SEMS to synchronize its different modules amongst themself. As in nature, each SEMS module is able to take its own decision thanks to a distributed algorithm embedded in each terminal. Our system is composed of simple elements cooperating together to achieve the overall goal, which is the reduction of the energy demand for an electrical installation. Stignergy is inspired by the term “stigmergy”; it was introduced by the French biologist Pierre-Paul Grassé in 1959 to refer to termites behavior. He defined it as: “Stimulation of workers by the performance they have achieved.” It is derived from the Greek words στίγμα stigma “mark, sign” and ἔργον ergon “work, action”, and captures the notion that an agent’s actions leave signs in the environment, signs that other agents sense and induce their subsequent actions. The “stigmergy” is a method of indirect communication in a self-organized system where people communicate with each other by changing their environment. 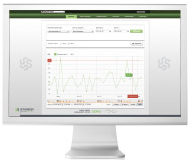 Access to the demonstration version for the energy monitoring dashboard of the Smart Energy Management System (SEMS).